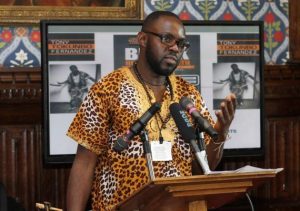 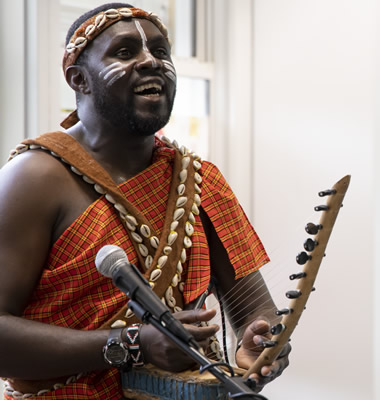 Founder & Director, Bantu Arts;
Steven started performing at a very early age whilst growing up in Uganda. He came to the UK as a performer and has worked with several organisations and agencies to promote African Arts.

He also performed in various theater productions across the UK and it was during this period that he realised the importance of preserving the traditional East African arts, in particular, the performing arts passed down through generations in Uganda. He also wanted to raise the profile of artists who specialise in these traditional performing arts for them to be recognised as professional artists who had a lot to offer the UK and Europe and to educate people about the different cultures.

Steven has actively been raising the profile of African arts by delivering drumming and dance workshops across the UK. You can get a glimpse of this by simply typing his name into google. To help achieve this dream and have a greater understanding, he studied Dance, Drama, Theatre and Performance Studies at Roehampton University.

He has received several endorsements and acknowledgements for his excellent dancing, drumming and performing skills from the African community and those outside of it.<br />“I believe in teamwork and expression of skills, talent and the awareness of the individual through various roles and contributions when engaged in art as this, contributes to the welfare of our society’’, he says.

In 2013, Steven founded Bantu Arts as a way of realising his dreams. Since then, he has worked hard with much success in bringing his dreams to fruition. It is his enthusiasm and experience about the importance of expressing talent through African arts, his empathetic and selfless style of teaching that has been essential in clients wanting to work with him again and again.

Having been a founder, manager and director of few other African organisations, Steven has worked with several high-profile artists and supported many organisations within the Performing Arts.

He is also closely linked to the Uganda High Commission and the Uganda Tourism Board which also shows recognition and appreciation of his profile as an artist, director and founder of Bantu Arts.

Any cookies that may not be particularly necessary for the website to function and is used specifically to collect user personal data via analytics, ads, other embedded contents are termed as non-necessary cookies. It is mandatory to procure user consent prior to running these cookies on your website.